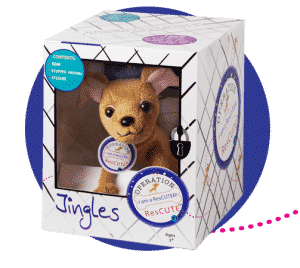 It was love at first sight for Laurie Brown-Nagin.. One fateful day when Laurie was going into a bakery she spotted a little dog being carried by an animal control officer to a neighborhood veterinarian’s office. The little dog was small and dirty but there was just something about her that instantly connected Laurie to her. Laurie didn’t realize it at the moment, but life would never be the same.

Laurie followed the animal control officer to the vet’s office after actually kissing the little dog. At the vet’s office Laurie learned that the the pup, “Jingles, ” had spent the night in a shelter. Jingles had been found in a garbage can. Jingles’ jaw had been broken, she was starving and had been literally thrown away.  Someone had found her and the vet was going try to save her. Laurie immediately committed to Jingle’s care and told the vet and the animal control officer that she would pay to get Jingles back into good health.

Laurie can’t really explain the connection between her and Jingles. She had 2 beloved dogs of her own and had never rescued a dog. But Laurie just couldn’t get Jingles out of her mind and so she kept calling the vet’s office and the dog’s foster mom to make sure Jingles was getting well. Laurie and her family eventually adopted Jingles. In the interview you’ll hear about all of the coincidences around Jingle’s adoption including the fact that Laurie had not been to that particular bakery – the bakery she was going into when she first spotted Jingles – in over 10 years. It is as if Laurie’s and Jingles’ meeting was predestined.

Jingles is Laurie’s first rescue dog though she has had many dogs and has a passion for animals. The experience of finding Jingles, nursing her back to health and realizing that she can make a difference in a dog’s life left quite an impression on Laurie. She knew she had to do something to help other dogs in similar situations.

Over 3 years of work have gone into Laurie’s brainchild “Operation ResCUTE” where children (or those young-at-heart) can pick up their own version of the stuffed-toy version of Jingles to become part of the “Operation ResCUTE Club” thereby making them a “ResCUTER.”  The Operation ResCUTE package consists of a box that looks like a cage, a little stuffed toy dog, a book and the official club sticker. It’s the perfect gift for kids aged 3 and up.

The idea behind the ResCUTE toy, book and sticker is to help kids to understand and appreciate dogs in need in a positive way. Laurie chooses not to use guilt or scary images but, instead, uses only positive, happy images and stories to help children to understand the benefits of adopting a dog. In addition, children and adults can feel empowered knowing that 100% of the profits are going to help get more dogs adopted.

The way that the profits are donated is incredibly fun and ingenious! People submit pictures of their rescued dogs along with their dog’s story to the Operation ResCUTE site. The entries are entered into a contest whereby the public votes for their favorite story. The top 3 entries with the most votes will determine the organizations that receive the donations. That is to say, the rescue organizations highlighted by the winners will receive the donation. In addition, Laurie will chose from one of the winners to make the next stuffed-toy-dog and story that will become part of another Operation ResCUTE package in the series! Each contest period runs for approximately 6 months.

As for Jingles today, you can see a picture of her here below. As you can see she is now full grown, sitting with the Jingles’ stuffed toy likeness. (toys are intended for children, not dogs).  The toy is approximately 10″ long and 4″ – 5″ high so this gives you a sense of Jingles’ size!

You’ll really enjoy the interview with Founder, Laurie Brown-Nagin. I loved meeting her and learning about  Jingles and Operation ResCUTE!

The Operation ResCUTE package is available on Amazon.

You’ll also want to vote for your favorite rescued dog on the Operation ResCUTE website.

The Operation ResCUTE gift is what makes all of the giving possible. It makes a great gift for any child in your life (or even yourself!).

If you like stories like this one there’s plenty more where this came from in our magazine. The magazine is available on Apple devices. Simply download the FREE app here and then purchase any issue you like. Note that Issue #2 is FREE so you can try us out to make sure that you love us!